Known as “the Den’s largest gang,” the Hathian Police Department (HPD) is the true embodiment of the word corrupt. On one side of the coin, there is the few born with an incorruptible sense of honor and duty that gets just enough policing done to make it too much work for any sort of Federal Investigation. On the other much more prevalent side there’s the dark souled brothers and sisters of the badge who through controlled chaos and ruthless tactics keep the rival gangs at bay, preventing the city from falling into complete hell… all while keeping their pockets lined. The HPD Officer Handbook is written in an OOC format, but contains vital IC information needed for role-play on a daily basis. This is not a “How To” manual, but rather a guide with a few basic rules to adhere to. If you have questions, refer to your supervising officer or leave a message for your Captain, Walter Bishop. Above all else, remember to enjoy your time as a member of the HPD in your role-play.

The police department is at the heart of the criminal role-play in Hathian. Since many policing role-play features such as Citations, Arrests, and Case Assignments are designed to award roles to the general population, it’s important to understand the following charter:

OOC Criteria For Ranks of Corporal and Above (All “People” leaders):

Rookies are often promoted to Officers once they’ve been sufficiently onboarded which includes participation in police reports, demonstrate knowledge in all policing protocol, guidelines, and role-play etiquette.

To move into advanced roles, besides activity, these promotions are primarily based on how well a player is able to role-play with others, their attitude in and outside the group, and their ability to extend role-play to others. 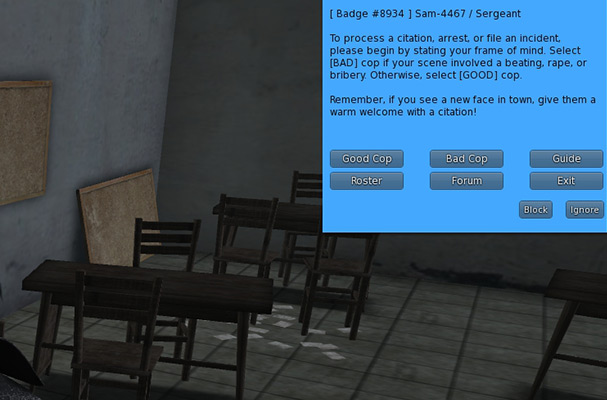 Before writing an incident report, arresting, issuing a citation, or submitting an all-point bulletin (APB), players must select their character’s “state of mind”.

If Bad Cop is selected, the report will display additional fields to identify the type of corruption the scene included as well as an opportunity to showcase the player’s best post from the scene that highlights the corruption. While writing a citation, the officer can use their discretion to set the final price of the fine, offering heavy discounts for “services rendered”.

Clicking on the radio will allow players to enter the full avatar username of another player to check if their character in custody has any priors (ie. number of previous arrests or if a warrant is issued). This procedure may only be done as part of a scene when an officer has stopped someone for questioning.
The old radio experience using channel commands has been eliminated and plaeuse the CD Municipal Services group chat to communicate issues and the CD Police Department group chat for anything else. 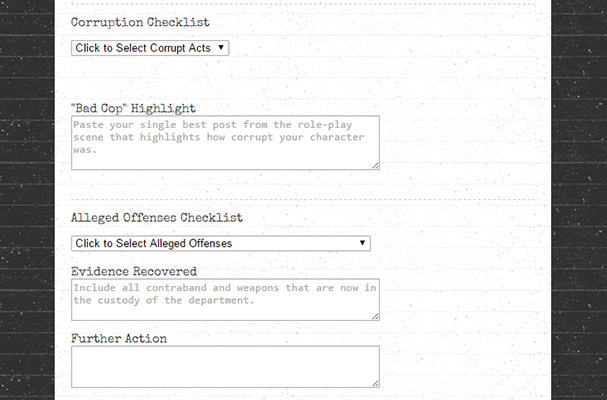 Reporting an incident or arrest is covered in this single report feature and is the most important function of an officer. When a report is submitted after an arrest or incident, both players in the police and in the public will be awarded cred towards earning new roles and unlocking features of the sim.

Follow the instructions within each field and submit relevant details. DO NOT copy/paste posts – we are looking brief summaries so other characters like detectives and lawyers can follow up.

Reports should be IC and provide enough detail for a detective to follow up on if needed. Bad Reporting may lead to specialized training for your character.

Citations are designed to engage new players on the sim; it’s a tool to be used to harass civilians and engage them into role-play without serious consequences. When a citation is submitted, the automated Court Mailer will send them an in-character notification of mail received regarding their fines and instructing them to visit the station to pay them off.
To be able to give a citation, ID is required. For cases where citizen refuses to show their ID make sure they are OOCly okay with whatever methods you wish to employ to force them.

AVOID the over use of citations. There is no need to hand a citation to every citizen you have approached. Those who continue giving large amount of citations in short period of times may face with removal of their ticket book (IC). There should NEVER be a citation and arrest on a same person in the same scene. 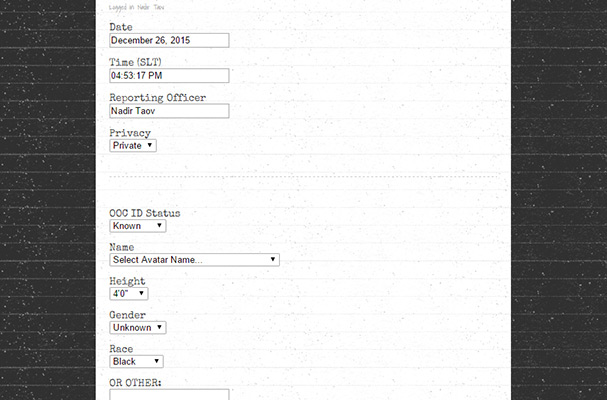 All-Point Bulletins (APBs) allow officers to issue alerts for suspects at-large. Officers in the field can use the description of the character defined to apprehend them if found in public. APBs are considered active for one week.

Despite patrol duties, an important function of the department is for detectives and officers to team up and resolve cases. Incident reports submitted by officers are filed for review by lieutenants. If a report requires follow up, a lieutenant will assign up to two active detectives and all officers involved in the report to begin investigation.

Detective and supporting officers assigned to a case will receive a notification in-world and can track their case assignments by accessing the Case Assignment boxes at the station. The assignment process is handled by lieutenants (major crimes only) and sergeants (all other crimes) as they review all submitted incidents. During the review process, most cases will likely be dismissed to maintain detectives’ focus on stories that are likely to extend into role-play and maintain the corrupt nature of the department.

While on a case, role-play often involves doing interviews, writing and appending case notes, arresting individuals for questioning, bargaining release between lawyers and cops, and/or moving the role-play into a trial. 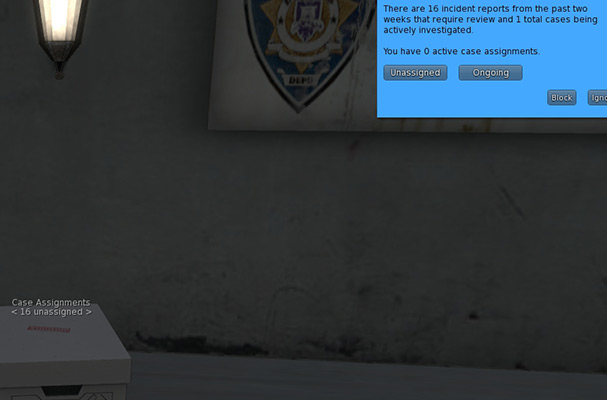 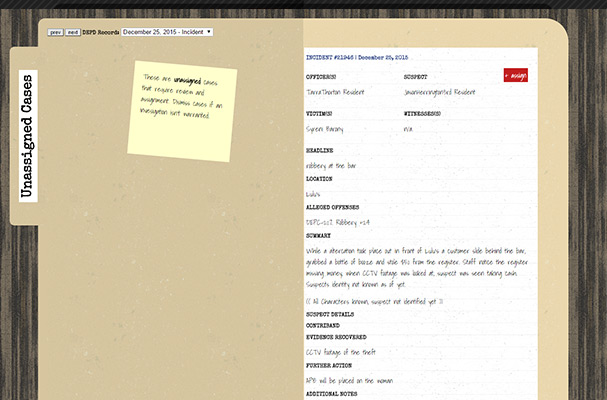 All citations, incident, and arrest reports are filed in the station. Each record can be searched by avatar usernames which will result in any records with a reference to the individual.

Records of arrests that were completed through either time SERVED or BAILED will be stamped as such. Citations that are still payable will allow officers to process payment, or display a DELINQUENT (not paid in time) or PAID stamp.

A stack of cold cases can also be accessed, allowing players to review assigned cases that were automatically turned cold when no updates were appended, or if the detectives had abandoned their search and updated its status to cold. 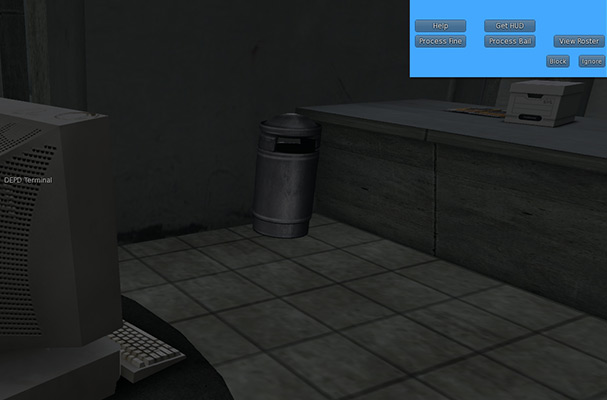 The police terminal at the station enables all officers to role-play the payment transaction between civilians either posting bail for an inmate or those who are paying fines associated to citations.

To post bail, the option to process bail transactions is found under the “Inmates” tab on the roster for each jailed player. Use the recommended range of payment due which is 10% of the total bail.

To process fines resulting from citations, the option through the terminal will allow you to search through records based on the offender’s name. On the citation report, you’ll either have the option to process payment or discover a DELINQUENT stamp on it indicating that payment is no longer an option and likely have a bench warrant issued for non-payment. 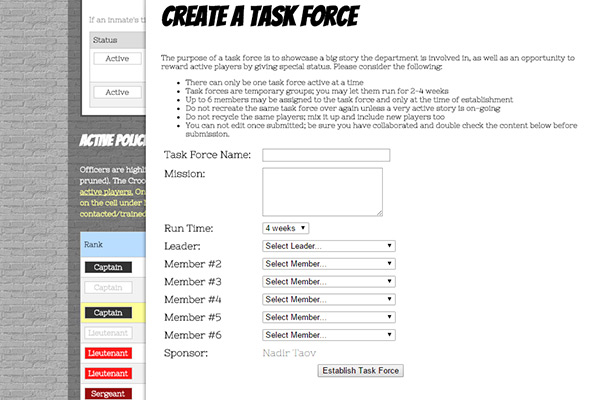 A task force is a grouping of officers on the roster that are assigned to a time-set mission (2-4 weeks). The mission is a story arc involving the police department that can be tracked via the roster. For now, only one task force may be running at a time.

Whether it’s attention on dealing with a particular faction, setting up stings, or just general show of force on the streets, Lieutenants are responsible for setting up the story, assigning members (mix of new and old players who are active), and supporting communication via notices. 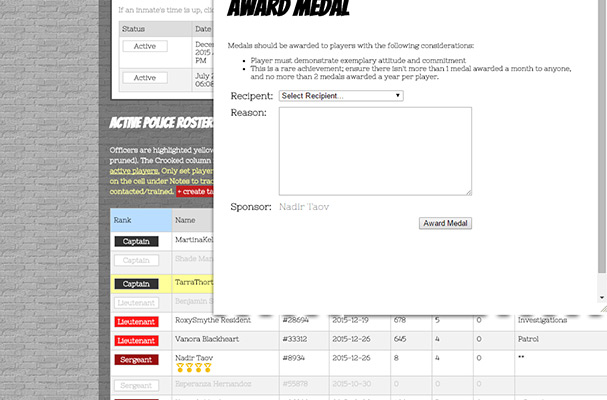 Players who demonstrate extraordinary attitude, commitment, and further the stories of others may have an opportunity to be decorated with a medal that appears next to their name on the roster. It is a rare achievement and the decision to award one comes with a deliberation between senior officers and the admins behind the Captain. Medals are also permanent so if a player leaves the group and returns, they will retain their decorated status.

A solid understanding of RP etiquette and earning the basic Citizen role is a prerequisite. To join the police department, players can visit the station lobby and use the recruitment poster to apply. Each application is reviewed by Nadir and may take a few days to process.

Once accepted, new players will receive a group invite to the CD Police Department & CD Municipal Department group with the starting role of Rookie. This role will allow players to access the station doors and computer terminals. We recommend the following steps:

Use the police group chat to radio in all activity, signing off with your call sign (see in-world HUD menu), request backup if possible, and post questions for clarification. We encourage players to proactively reach out to corporals, sergeants and lieutenants as they are always there to help and ensure everyone is having a fun in the group.

The procedural role-play involving an arrest should include the dictation of the Miranda Rights with a flare for asserting police dominance. Consider the following recommendations:

There are no comments for this doc yet.