Visit the Welcome Area in-world and click on orange forum poster. You will be given your username and password in-world instantly - you can also reset your password from the same board.
Teleport to Welcome Lobby →

Visit the OOC area and click on the "Web Account Creation" board for instant registration. You will be given your username and password in-world; you can also reset your password from the same board.
Create Character →

Chaos. Kogarashi thrive in their need to wreak havoc while exposing the truth about human nature - they do not operate for money or materialistic reasons. They work to corrupt or force others to play in their games and often cause people to do things they normally would not in order to survive.
Leader:

Tempered by chaos and crowned by couture, the King Street Bones unite in a raw, stylish endeavor of genderbending brutality to take over the city and gorge themselves on power, wealth and respect. No one is off the menu permanently for the Bones, but they may be persuaded to diet, for a price. Violence has never looked so good, demanding the spotlight and your wallet.
Leader:

The Rejects represent a pillar of hate and contempt that has stood proudly as a blight on the small Louisiana town of Hathian for generations. Intent on impacting the drug trade by fighting to control the sale and import of cocaine, as well as limit the sale of other narcotics, they are willing to use coercion, violence, and fear to accomplish their goals.
Leader:

The Hoppers are a group of misfits hunting in Hathian, partly members of the Hopper family, partly kindred spirits that joined the family. A good number of the Hoppers are cannibals, not all though but what all have in common is a certain contempt for society. Being outcasts by choice they respect no bounds of law and society and simply take what they want.
Leader: 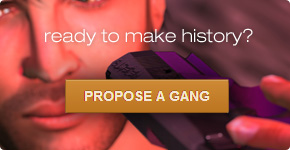 Before you propose, please read the Faction Proposal Guideline page for more details.