Visit the Welcome Area in-world and click on orange forum poster. You will be given your username and password in-world instantly - you can also reset your password from the same board.
Teleport to Welcome Lobby →

Visit the OOC area and click on the "Web Account Creation" board for instant registration. You will be given your username and password in-world; you can also reset your password from the same board.
Create Character →

To become an instructor and part of Columtreal Faculty, you must first read and understand the guidelines below, then apply for membership. If your application is approved, you will receive an invite to the Columtreal University Roleplay with instructions to on how to join the CU Faculty group.

Students and Faculty of CU who are approved will enjoy the following:

Columtreal University is an ALTERSCAPE community which features the Character Evolution System. It’s a role-play system with features designed for text-based role-play, doesn’t require a HUD to use, and rewards members with exclusive group titles while tracking their role-play history / character development via different groups who submit content like police reports, medical reports, and advising reports. Additionally, the time spent on sim, in different business venues, and participation on forums help you earn new roles quicker. Members can access their history by logging onto this website.

Basically, the more you interact with the police (get cited, arrested, etc.), hospital (get treatment, recover, etc.), work (RP at one of the many official businesses as an employee), spend time on the streets of Hathian or campus, and teach or attend courses, your character will evolve and you will earn special titles indicating your experience and status in the community.

New faculty members will begin as CU Lecturer or the entry-level staff role (Clerk / Registrar) and will earn new ranks by being present on campus, hosting classes, advising students, and participating on forums to accrue the necessary reputation, as detailed in the section above, to advance in the following order:

The first-level CU Lecturer role is a popular role used by players who are interested in either teaching occasional workshops or seminars while primarily playing in Hathian to those who wish to grow a long-standing career on campus.

Every working class room has an overhead projector (themed with CU colors) in the front. These projectors can be clicked on to interact with the Class Registration System to create and track classes.

Instructors will first need to click on the projector and START a class (note: instructors must appear on the faculty roster in order to have access to start classes). The option will load a short web form to fill in the class title, what major it applies to, and a brief description. Upon submitting, the classroom would now be booked for the next 90 minutes. If another faculty member clicks on the projector, it will inform them that the class is currently booked and how much time left until it becomes available (we have 3 classrooms, so try another!).

The recommended flow for anyone interested in running a class on campus is to use the events calendar on the site to post the date and time of your class/workshop. On the day of the event, when you’re ready to start, just follow the instructions above. Posting on the calendar is not a requirement to start classes; it’s just highly recommended to get the maximum students. The more students attend, the more credit a faculty member will earn towards advancing their rank on staff. We also didn’t make it a requirement in case there are enough students on campus and someone wants to hold an ad hoc workshop/class.

Students at this point can click on the same projector to immediately enroll into the class. If an instructor has not started the class, it will indicate so. At this point, students can just RP in the classroom. Depending on when they enroll and how long they RP in the classroom, they will up to anywhere between 1-3 credits for the class and it will appear on their transcript. If a faculty member wants to attend a class as a student, clicking on the projector will give them an additional option to enroll.

For over a decade, Crack Den has been home to characters created by players from around the world. The wild imagination and creativity of the community keeps it thriving.

Read this guide through the bottom of the page and select which path you wish to apply for (Citizen, Campus, or Youth).

RESPECT OTHERS AND ENJOY YOURSELF!  Crack Den is a private community that provides a safe, private, and creative environment to play in. Players seeking to harass or undermine enjoyment for others can be reported through our abuse portal.

GUNS ARE RESTRICTED to players who have earned the Armed privilege. Eligibility can be tracked through your Crack Den Story HUD.

CHARACTERS REPRESENTING YOUTH must apply through the Seaside Youth Center and are strictly prohibited from sex scenes and the adult zone in Hathian.

NON-HUMAN AVATARS ARE RESTRICTED to domestic animals like cats and cats, but may be killed in combat. Furries are considered “humans-in-a-costume” and are welcome to explore as visitors. Animesh attachments require admin appproval.

VEHICLES USAGE REQUIRES a paid permit and is subject to limited availability. Please check in world for more information.

CD GROUPS AND ROLE TITLE ARE EXCLUSIVE to approved groups that have been proposed, peer reviewed, and approved by community leaders.

The difference between the character versus the player is important to understand:

In-character (IC) refers to the state and perception of the characters in the story. Basically, it’s what the fictional character, not the actual player, would see, hear, think, and feel.

Out-of-character (OOC) refers to the real life perception of the player. If you need to break character momentarily to explain a detail or simply say “brb”, you should wrap double brackets around the text.

^ No need to emote when double parenthesis-wrapping OOC chat.

If a player’s primary goal is to win, they are likely a “powergamer” and wouldn’t last long in the Crack Den.

The term “powergaming” refers to an unfair advantage a player creates for their character. In combat scenes, it is commonly seen as a character who is able to frequently dodge attacks, perform ninja-like moves and combo hits in a single post, has unreasonable strength, or attempts to dictate the resulting injury for their opponent.

/me immediately dodges the sheriff’s baton. He then picks up a rock, and throws it at the officer’s head, knocking him out cold.

^ Not only does the player decide to dodge the hit, but they also dictate the result of the attack on the sherrif.

/me tumbles backwards, reeling from intense pain, as the baton cracks over their shoulder. “Augghh,” he yells and crashes to the ground. Without thinking, he then grabs the closest rock he can find, aims it at the sheriff, and let’s it fly with all their might.

^ The player takes the hit in good spirit and only makes an attempt to hit his opponent. Attacks  should always be written as an attempt to give your opponent a chance to post their reaction.

The term “metagaming” refers to players using knowledge of a story or environment, gained outside of role-play, to their character’s advantage. It is a form of powergaming and is not allowed.

A common example of this is when a player has their character greet another character simply by reading their avatar name. That is a basic form of metagaming because from the character’s point of view, they’re strangers to one another and never learned of the other character’s name through role-play before.

Players should exercise caution when learning details of a story and make sure their character’s action is only based on role-play that actually occurred.

For scenes that impose long-term consequences, please consult with the player first. If you’re not comfortable with a scene, you must inform the other player immediately and work something out (ie. fade-to-black or escape plan).

Limits should never provide an unfair advantage. For example, if a character is in a situation with a gun to their head, the victim must yield reasonably instead of relying on a “no death” limit to force their opponent into a no-win situation.

Players in the Crack Den must always emote and take turns writing posts. A post always starts with the /me command and usually includes up to several sentences that describe a character’s physical and verbal actions combined.

Scenes are efficient and fair when the following posting rules are observed:

/me picks up a tire rod from the ground.
/me then aims it at the police officer and throws it at him.
/me yells, “Take that!”

/me picks up a tire rod that was laying on the ground. He then turns to face the police officer, aims, and hurls it in his direction. “Take that!” he yells.

^ Consolidating your thoughts into a single post is the way to go.

^ Writing in first person just reads too personal, and often seen as creepy…

/me looks at the woman and licks his lips. He then says, “I’ve had my eye on you…”

^ Writing in third person point of view reads as if the character is speaking and not the player.

To start a new scene or join in an existing one, move your avatar into position and observe for a few minutes. When writing an entrance into the scene, be sure to address the characters you want to interact with.

Where will your character’s journey begin? Depending on the kind of scenes you enjoy playing and character age, we have a few starting paths for you to consider:

Everyone starts here… trying to make ends meet by any means necessary. Just depends on how far you’d be willing to go.
REGISTER CITIZEN

Growing up on the streets ain’t easy. Pick your friends wisely … is blood really thicker than water?
REGISTER YOUTH 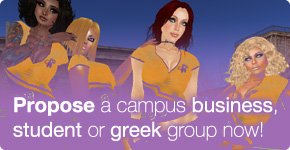